This is a piece of fiction I wrote. I think it’s both inspiring or powerful. Or so I hope.

“Last ball,” the man says. He drops the ball into the pitching machine and it flies faster than seems possible to hit. But the hitter knocks down the moment of panic, swings as he’s done a million times, and crushes the ball deep and hard. The batting cage nabs the ball without effort and it falls to the ground, bouncing harmlessly along the pavement.

“That was a great one,” the man behind the pitching machine says. “Good one to end on.”

The man with the bat looks away, out through the squares of the cage, at his truck. Only two vehicles remain in the parking lot: his battered, beat-up truck and the faded, rusty sedan owned by his friend.

It’s growing dark, and the sun dropped fifteen minutes ago. Official team practice ended two hours ago. Quite a few players stayed afterward, but they’ve all drifted away.

Only the hitter and his long-time friend remain.

“Let’s do another bucket,” the hitter says. He swings the bat tentatively. He’s got a shoulder that ails him from an old injury, and a wrist that creaks and is almost shot. His friend eyes him as he swings the bat.

“You sure that’s a good idea? Don’t mess up that shoulder again by pushing too hard.”

The hitter nods. He’s unsure as to whether he should do more. Push too hard and you set yourself back. But a clock is ticking, and it’s not just his wife’s anger because he’s running late again for dinner. The hitter is 27. He’s still in the minors. He’s still barely earning any money.

“Load the balls up,” the hitter says, his voice strong and defiant.

Across town, a writer hurries up the steps to his desk. He’s worked a full day at a job he doesn’t enjoy. He’s eaten dinner with his family and mostly paid attention, burying an idea he has for his next chapter. He’s even gone the extra mile, and after helping the eight-year-old girl with homework, and the wife with laundry, he’s sacrificing personal time to chase his dream.

Game of Thrones is on TV, and his wife has begged him to watch it with her. He defers. Everyone will be talking about it tomorrow, and he’ll yet again be the guy who’s not cool. Who’s not in the know. Who’s still the delusional dreamer.

He made twenty dollars in royalties last month and he hasn’t had a new review on his books in more than a month. But he knows they’re good. More importantly, he knows he can be great.

Hell, he’d read part of a best-seller during lunch, and yet again cursed the fact that the book was average at best. He knows he can do better. He knows he can make it big. If he just doesn’t give up. If he can just keep believing.

But he sits down and his forearms and wrists immediately start to hurt. How many words has he written in his lifetime? How bad is the carpal tunnel syndrome?

He hears his wife gasp from the living room below. Game of Thrones must be really good tonight. He starts writing out his idea, but it doesn’t seem as good as it did earlier. Nonetheless, he knows the rule: “writer’s write.” He ridicules his weakness and doubts. He starts writing. He puts a few lines down, but they miss the mark.

He looks away, stares out the window, then buries his head in his hands. Reluctantly, some time later, he lifts his head and starts typing again.

Four blocks away, it’s now grown dark. A lady laces up her gloves. It’s heavy bag time. She’s already done forty-five minutes of running for cardio, then an hour and a half of jujitsu. She’s rolled around the floor, escaped hundreds of holds, and applied some great chokes and mock “ground and pound” during the session. Now it’s time to work on her kicks and punches.

She’s full-time now. Doesn’t have to work the day job anymore, which is great. But she’s only earned twenty thousand this year from a single fight, and the debt is starting to grow. Worse yet, she hurt her knee in that fight, but can’t afford the surgery. Either the cost, or the time away from the ring, the only place she gets paid.

Almost no one that she knows — other than her fellow fighters — supports what she’s doing. Her friends and family say women shouldn’t fight. It’s too barbaric. She’ll get hurt. Shouldn’t she be getting married and having kids?

She’s thirty. Wonders if maybe they’re right. Then pushes down the thought.

She steps up to the bag and begins throwing combinations. Punches and kicks. An elbow. A step back to dodge an imaginary opponent’s strike. Then she’s back in on the bag, landing powerful shots. But is she as good as the champ? Or as even as good as those ranked fighters in the Top 10?

She thinks so. But she’d gotten a bit scared in her last fight. Only barely won it, really. Had just squeaked by.

Just need to train harder, she thinks. But she thinks about that debt. And about the knee that needs that surgery and that won’t let her kick at full power.

All three people — the baseball player, the writer, and the fighter — face their demons every single day. On some days, almost every single hour. They are so close, yet so far away.

They’ve already pushed far beyond their peers, most of whom started with the same dream but have already fallen away and given up.

What keeps these three going? What fuels their belief?

We admire them. We envy them. And often we laugh at them.

But still they push on. At least on this day. 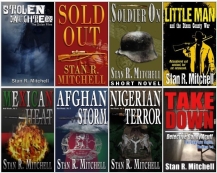 If you’re looking for an independent artist to support, look no further. You’ll love Mitchell’s books. Click the link at right to check out his books.

Stan R. Mitchell writes tight, fast-paced books, with intricate storylines that keep you on the edge of your seat. Mitchell has written ten books and sold more than 70,000 books since his career took-off in 2012. If you’re looking for a fun ride, give one a try at http://amzn.to/1brrc37 View more posts

2 thoughts on “The dreamer’s lament”