If you hadn’t heard, Newsweek will soon stop printing.

As a small, weekly newspaper publisher, I know the challenges facing print. And I considered writing a three-point post on the major things Newsweek had done wrong.

But, four came to mind off the top of my head.

So, here are my top four reasons why Newsweek is going out of print. 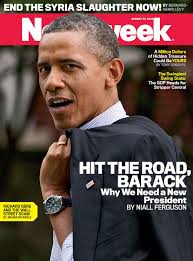 So, I’m guessing putting ridiculous covers on your publication that pisses off 50 percent of your readers, then turning around and pissing off the other 50 percent is probably a bad strategy.

Now if we could get rid of about another dozen media outlets that are over-the-top and constantly blowing things out of proportion and stirring up fear and hatred.

P.S. Please accept the greatest gift I can give.

Sometimes, the world we live in makes no sense.

For some stupid reason, the folks at Fox News outed a Navy Seal who wanted to remain anonymous. The story that they released the man’s name in is here.

If you read the story, there seems to be absolutely no reason to “out” him other than they’re still trying to keep the classified leak story alive against Obama. (Read their article, if you don’t believe me.)

And here’s the story from the AP confirming that the great patriots from Fox News, who spend half their time trying to create evidence of liberal bias elsewhere, were (in fact) the first news agency to release the Navy Seal Chief’s name. (Link.)

Great job, Fox News. You just put a man’s life, and his family’s, in serious danger.

P.S. Please accept the greatest gift I can give.

P.P.S. Thanks to all who continue to make my novel Little Man, and the Dixon County War a huge success! It’s gone as high as No. 16 on the Amazon UK Paid List (see here and here), landing smack dab between a Louis L’Amour and Zane Grey book. And don’t forget to check out my newest novel (Sold Out). It’s already gone as high as No. 81 on the Amazon Paid List for the category of War (see here and here). Learn more about both books here. And thanks a million to all my friends and fans who peddle my stuff like street pushers.

Or, sign up for new book news. I will literally only email you when I publish a book.